TEAM ROSTER AND BIOS
Who's representing your country?
Select any country name to view their team roster and learn more about our competing athletes.
Back to 2021 Pismo Beach ISA World Para Surfing Championship

England
DIVISION / Para Surf Prone 1
Spike Kane
I have a son, David, who lives in Germany. He is a professor at the university of Stuttgart He, his partner Julia and my Grandson Charlie came to the ISA 2020 in La Jolla to watch me compete.  My mum turned 92 in November and still lives in the house I was born in in Liverpool.  I am one of 8 children she had and raised with my father.  I started surfing while working at the Liverpool Water Spots Centre in the early 80's. While working there I qualified as a senior coach in several paddle sport disciplines working with the then Olympic Conoe/kayak coach.  I came to America's Pacific Northwest in 1988 to lead sea kayak and sailing expeditions in the Puget Sound on the Canadian border in the San Juan Islands. I fell in love with Washington State and made it my home.  I trained in Seattle and earned a degree in marine carpentry to become a Shipwright (wooden boat builder) I did this until I was injured in 2005. I have been competing in adaptive surfing events since 2013 and involved in adaptive surfing since 2003, before I was injured.  I was awarded the Surfing England "Global Ambassador Award" for contributions and the positive representation of English surfing within the international community. I was awarded the Life Rolls On athlete of the year in 2015 I was recently (October 2021) given the Ocean Of Possibilities Award from accessurf Hawaii for contributions to the global adaptive surfing community.  During international surf competitions in California, my house in Vista becomes base camp for many athletes traveling from overseas with 25 or more people and up to 10 nations all under one roof. I have a Poodle Service Dog named Buttons after the legendary "Buttons Kaluhiokalani" From Hawaii.  I have represented my country at every ISA World Para Championship. I have placed 5th every year.

England
DIVISION / Para Surf Kneel
Martin Pollock
I'm a British Army veteran. I learnt to surf as part of my rehabilitation following injuries sustained in Afghanistan.  I learnt with Operation Surf, a non profit based in San Luis Obispo, CA.

England
DIVISION / Para Surf Prone 2
Natasha Davies
I started surfing just over 2 years ago after being inspired by an online video of some adaptive surfers who had a similar disability to me. I started searching for places where I could give it a go and was put in touch with a surf school on the South coast in Bournemouth. I instantly got hooked after a few sessions in the water.


I'm really excited to be surfing for Team England at the World Championships in Pismo this year!

England
DIVISION / Para Surf Prone 2
Hannah Dines
"Hannah Dines is an athlete, writer and activist with cerebral palsy and went to Rio 2016 Paralympic Games with the Great British Cycling team. She has considered herself a "surfer of tarmac" for many years due to the wobbly nature of her two land-based disciplines, frame running and trike racing. Disaster struck when she didn't make the Tokyo 2020 Paralympics and received a new and scary diagnosis. She jumped in the sea where an adaptive surfing club, Surfability UK, taught her that sliding down the "hills of the sea" (waves) were very like racing downhill on her trike. Whether therapy or sport, surfing has allowed her competitive nature to return and she's made it onto the English team for her first Surfing World Champs as an assisted prone athlete. She'd like to point out she's actually Scottish but was born in England, was raised/lives in Glasgow and has a Welsh granddad, too, though no Irish relatives that she knows about. Mostly, she is hoping that Scotland will be ready to accept adaptive surfing representation soon and is sad that they aren't ready yet. Worlds is critical for Hannah, to get back to doing what she loves- performing under pressure in challenging conditions, competing at a high level and using the healthy years she has left to make the most of her body. She thanks both Surfability and Team England for allowing her to explore this new, wet sport that feels both like she is inside a washing machine and also like she has been given a new lease of life."

England
DIVISION / Para Surf VI-2
David Lewis
After recieving my Sight Loss and Retinitis Pigmentosa diagnosis in 2017 i was lost for a year or so. In 2019 I found that I was classifiable for Visually Impaired sports and started to train with Surrey Visually Impaired Cricket. A lot of the players enjoyed cricket for fun but also played other visually impaired sports at international level. Thi iencouraged me to think about the sports that I enjoyed as a hobby before sight loss - surfing was my favorite. I reasearched a but and found out about the VI categories in Surfing and the reached out to Andy Joyce at Surfing England to see how I could get envolved. Since then I have competed at 2 Englis Adaptive Opens and have been surfing as regulally as lockdowns have allowed. Really looking forward to surfing at this event in Pismo Beach, California.

England
DIVISION / Para Surf VI-2
Melissa Reid
Visually impaired surfer from Cornwall.  paralympic triathlete representing Great Britain in Rio and Tokyo. After a back injury making triathlon more challenging I got back into surfing.  currently the double world champion looking to retain my title this year.  min the process of doing my Isa coaching so that I can give more back to the sport.

England
DIVISION / Para Surf Stand 2
Charlotte Banfield
Hello, my name is charlotte banfield, im 23 years old and i live in Cornwall, England. I have Dystonic cerebal palsy and Autism and will be competing in the ladies Para stand 2 category. I love to surf, and have been surifng since i was 12 years old. When im in the ocean i feel at my most happiest. Other things i enjoy include playing Basketball, going to the gym and seeing my friends. 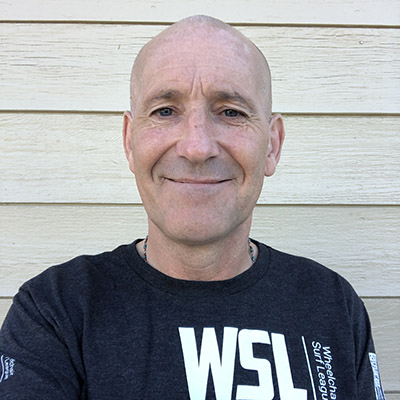 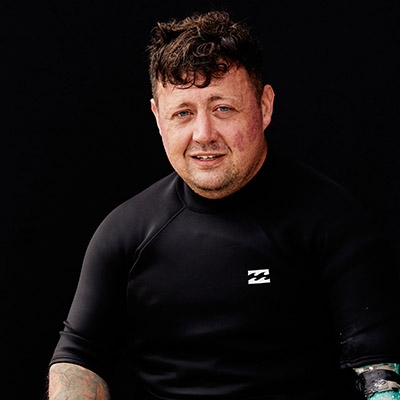 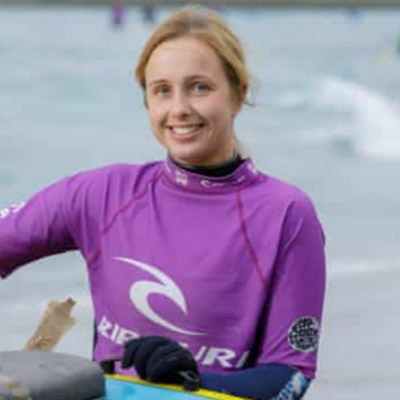 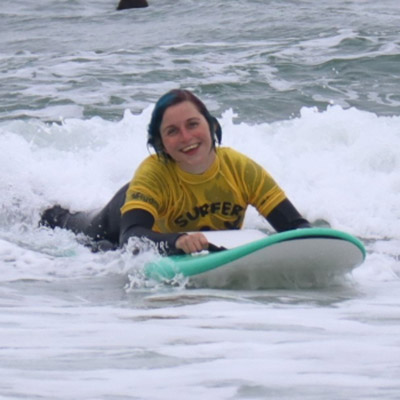 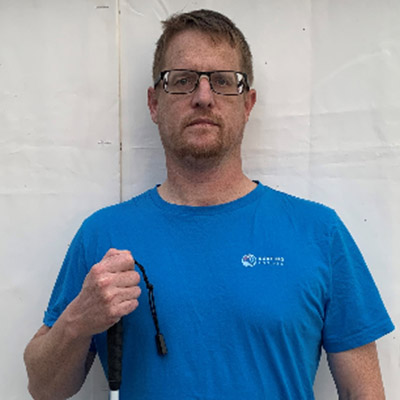 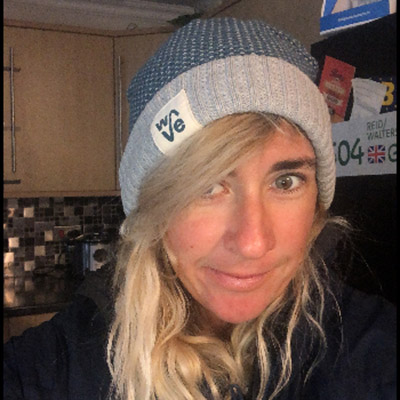 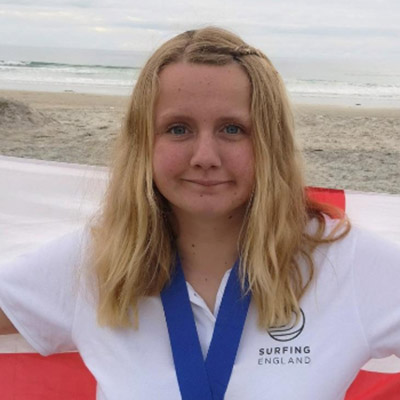 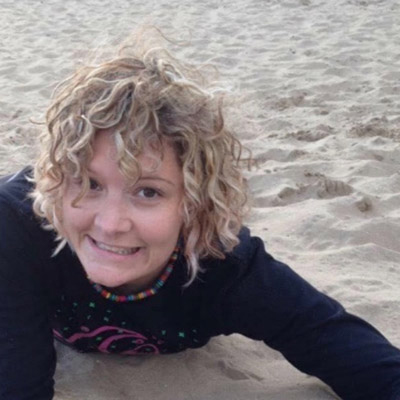 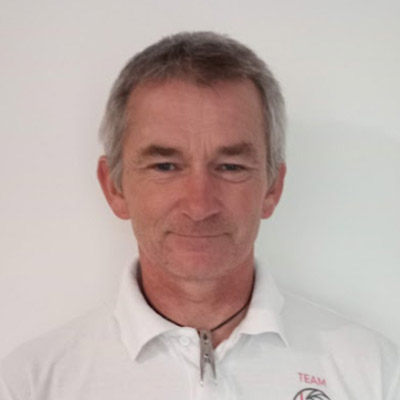