TEAM ROSTER AND BIOS
Who's representing your country?
Select any country name to view their team roster and learn more about our competing athletes.
Back to 2021 Pismo Beach ISA World Para Surfing Championship

Australia
DIVISION / Para Surf Prone 2
Sam Bloom
I have grown up on Sydney's northern beaches and have surfed ever since I was about 14.  I used to be a Registered Nurse annd have travelled extensively particularly throughout Africa. I am married and have 3 boys. In 2013 whilst holidaying in Thailand I sustained a Spinal cord injury and stuggled with my new life. I got back on a board 5 years after my accident which brought happiness and a sence of freedom back into my life. My story has been made into a feature film callled Penguin Bloom which was released internationally in 2021

Australia
DIVISION / Para Surf Kneel
Mark Stewart
1976, When ‘Mono’ was fifteen he was told he had Osteosarcoma; bone cancer. He went through 2 years of chemotherapy after the doctors removed his right leg above the knee.  After he lost his leg he started to work out how he could surf again. He believes it was this passion to surf again that has been his driving force and determination in life. In September 2015, at the age of 53, he won the inaugural International Surfing Association World Adaptive Surfing Championship in La Jolla, California.

Since then- He has Competed in 21 International Surfing events - making the final in all and WINNING 18 OF THEM.

“Surfing’s kept me alive and kept me inspired — it’s good for the body as well as the soul,’’ he said. “It’s such a leveller. You can surf with people and they don’t even realise you’ve got one leg until you get out of the water. “I had a young boy come up to me in Indonesia not long ago who told me ‘if I ever lose a leg, I want to surf just like you’. It was like wow, pretty heart-wrenching stuff.’ Mono lives life to the fullest and his positivity and tenaciousness is infectious. “There are so many people that are worse off than me, that inspire me,’’ Mono said. “I’m lucky; I’m only missing a leg.”

Australia
DIVISION / Para Surf Prone 2
Jocelyn Neumueller
I am a sprint kayak Paralympian (RIO 2016) and World Champion. Shortly after being crowned VL1 200m World Champion in 2017, I paralysed my left arm during a training session, which forced me to retire from sprint kayak. Despite solely relying on the mobility of my right arm, I quickly fell in love with the freedom and enjoyment surfing brings to my life. I am a proud advocate for adaptive surfing inclusion within South Australia, AUS.  I am debuting for 'The Irukandjis' (Team Surfing AUS) in the Prone assist 2 classification. I wouldn't be able to surf without the assistance of my amazing team in the water with me.

Australia
DIVISION / Para Surf VI 1
Kirk Watson
I grew up on an island on Sydney's Northern Beaches which is an absolute haven for watersports. I loved surfing and would get out there with my mates as often as possible. As a teen I started losing my night vision and peripheral vision. I was diagnosed with Retinitis Pigmentosa a degenerative condition. This progressively took things from my life not just my sight, my opportunity to drive a car, my independence, confidence, bike riding, surfing….. At this point I got into sailing and started to sail competitively, which gave me great freedom. Ocean racing taught me about everyone bringing their strengths to the team. I’ve competed in many campaigns including 10 Sydney to Hobarts. I would surf very occasionally with friends when out of Sydney. A friend who is an amputee surfer encouraged me to enter the Australian National para titles. This really inspired me, seeing others surfing despite their challenges. This has pushed me to get out there as much as I can and really work on improving my surfing. In 2019 I competed in the US open, where I won the bind (VS1) division. Unfortunately I was knocked out early in the 2020 ISA para world titles, and I’ve been training hard at every opportunity since then.

"The word 'can't was banned in our home. I was taught that anything is possible as long as you have the focused desire and are willing to put in the hard work."

Diagnosed with Macular Dystrophy at age 5, Matt was one of the first people in the world under the age of 40 to be diagnosed with the disease.

Although he had lost his vision, Matt remained in a mainstream school, which was not deemed as ‘normal’ in Australia during the 1980s.

Matt grew up like all other children playing Rugby League for the Narrabeen Sharks from 5-11 years, transferring to Rugby Union and playing until his late teens, including the first fifteen team for his high school and reps for Warringah Rats.

He felt most at home playing sport and less different to others. In his teens, his love for surfing developed. He learnt to sail, played Ice Hockey, and was personally awarded the Sid Hamilton Shield state award by the Mayer of Sydney.

However, despite his success in sport, Matt faced constant bullying at school and challenges with the school system not being set up or equipped to support a child with a disability.

To deal with the bullying, Matt responded with violence to those who wanted to put him down and it took until his late 20s to learn to not react with anger and physical confrontation when dealing with conflict.

For a charity quest in 2009, despite not owning a bike, Matt rode a single bicycle on his own, 1,200 kilometres from Sydney to Melbourne.

To this day, it is still the world record travelled by a blind person on a bike and what started Matt on his cycling journey. Today he is still one of the world’s most accomplished professional blind cyclists.

On this ride, he was noticed by Cycling Australia talent scouts and by 2011, he was riding for Australia. Matt went on to win cycling events worldwide from 2012-2016 and retiring at the Rio Paralympics.

He also achieved an astounding 14 Australian Titles across four disciplines and was the driving force behind tandem bikes built from Carbon Fibre.

This had never been done before and created new ways to measure power output for tandem riders.

This was the fastest time in history for a tandem bike ride, not just for Para Cycling and the third-fastest time that anyone on any pushbike had completed the 4 km pursuit.

As a blind surfer, Matt is pushing the limits off what is physically possible. A documentary is currently in production to capture Matt’s journey chasing big barrels and him chasing his fourth ISA Para Surfing World Title.

Today Matt gives back to the community by running clinics for blind and visually impaired children since 2018 teaching them how to use sound, touch, and other senses to enjoy the freedom of the ocean.

With authentic delivery and the ability to speak to many themes, Matt has been a professional speaker, commentator and facilitator for 10+ years.

He has inspired many at events for many iconic brands and businesses across Australia but not limited to:

Brands Matt has been sponsored by over the years as an athlete.

Australia
DIVISION / Para Surf VI-2
Jack Jackson
My name's Jack, I'm from Woy woy, NSW, AU. very passionate about surfing and music. I make my own music on spotify and all the other streaming platforms under the name 2JACK.

Australia
DIVISION / Para Surf VI-2
Sarah Jane Gibson
From having diabeties from 10 years old my eyesight failed so to did my kidneys. In 2009 I received a kidney and pancreas transplant. The anti rejection drugs have caused 3 types of cancer(remission). In 2018 whilst surfing I broke my acetabulum or pelvis joint that hold the leg in position. The surgeries used to reconstuct the joint used pins plates and screws that restricted movement so much I had to relearn how to surf in 2019. This was achieved with the support from my Husband and Coach Brett Gibson. My main motivation came from the surgeons saying I would never Run, Walk or surf again. I used this statement to proove them wrong as I am here now.
Sam Bloom 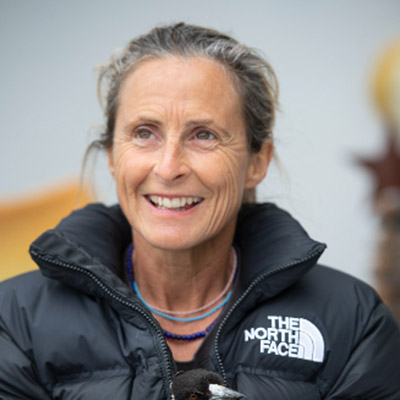 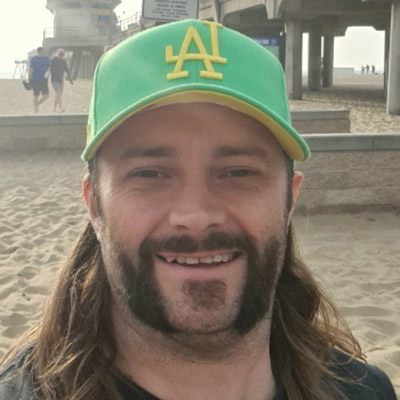 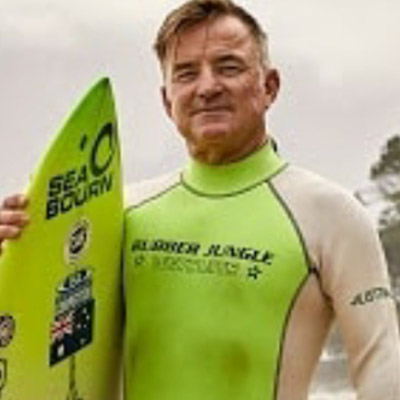 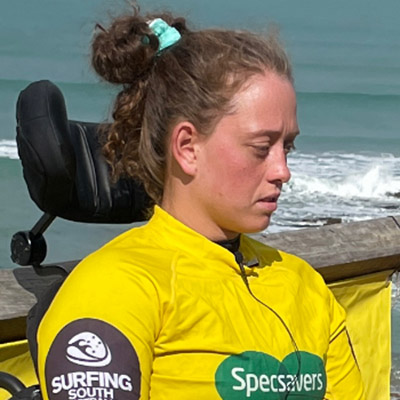 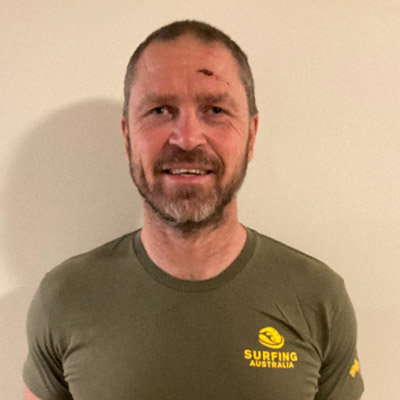 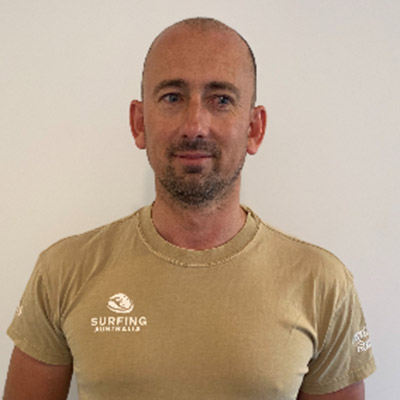 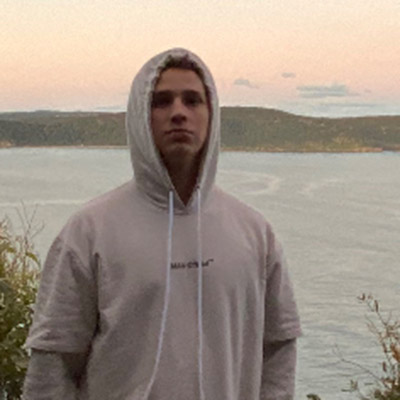 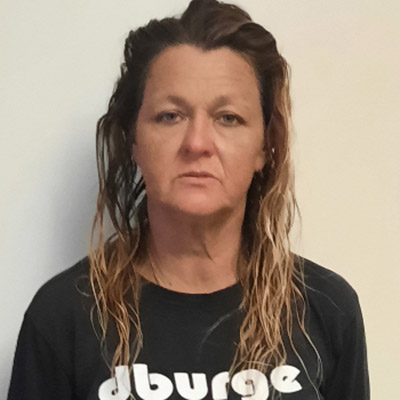