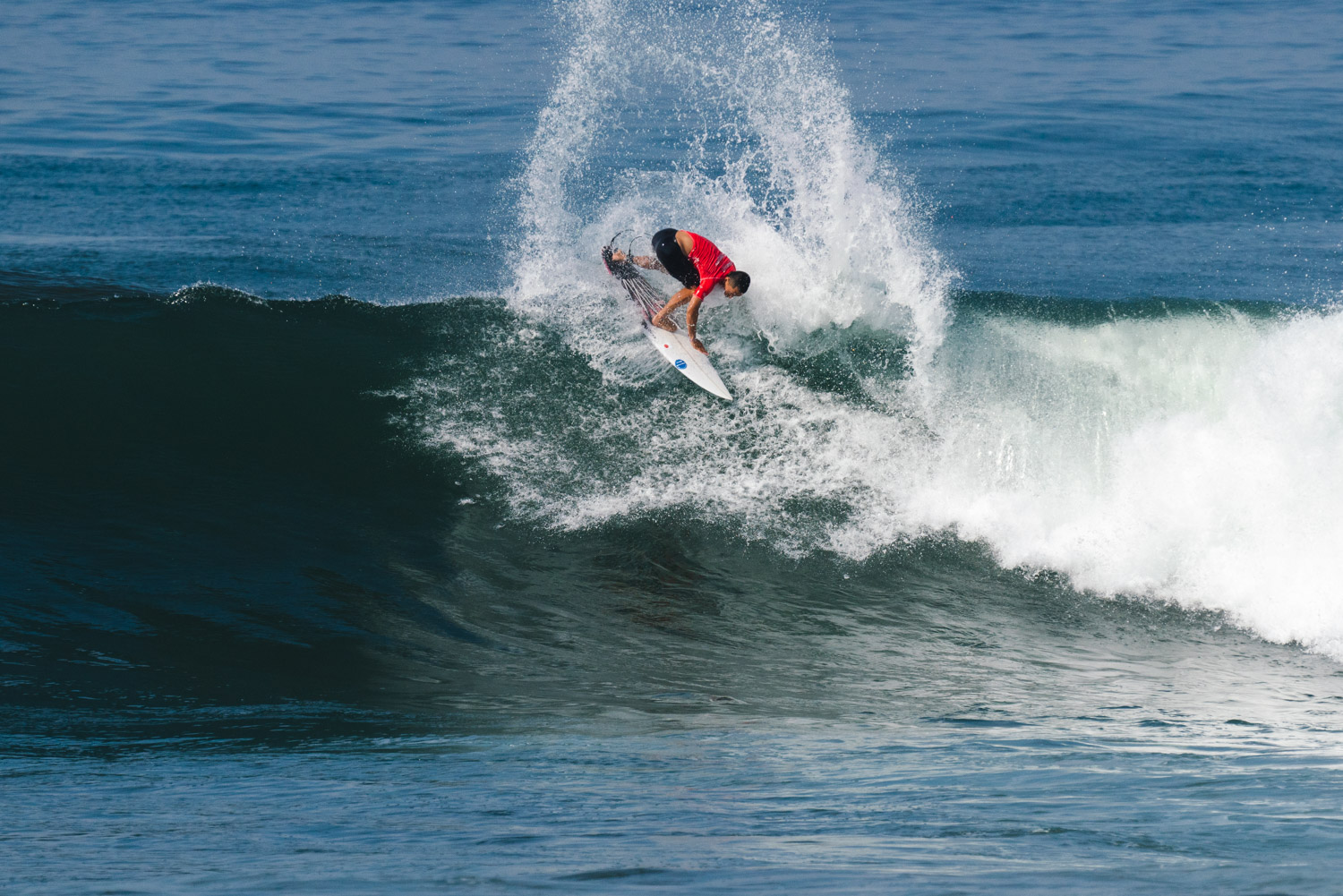 12 slots remain to be awarded through the event – 5 for men and 7 for women – awarded to the top ranking eligible athletes.

Of the 16 women left in the Main Event and Repechage Rounds, 13 are gunning for the 7 slots. Three of the 16 surfers will not factor into the qualification because Australia’s Stephanie Gilmore and Sally Fitzgibbons have already qualified via the 2019 WSL Championship Tour (CT), the top event in the qualification hierarchy, and USA’s Alyssa Spencer cannot qualify because her country has already reached their quota of two women in Carissa Moore and Caroline Marks.

On the men’ side, 12 of the remaining 17 surfers are aiming to earning the 5 qualification slots. Four of the surfers left in the draw, Owen Wright (AUS), Jeremy Flores (FRA), Michel Bourez (FRA), and Kanoa Igarashi (JPN), have already qualified via the 2019 WSL CT.

Among the surfers still remaining in the draw are harrowing storylines that range from the hometown hero Bryan Perez carrying his country on his back to Japanese surfers whose qualification could come down to a battle with their teammates.

Team Japan finds themselves in a strong position for the team Gold with 5 of their 6 surfers remaining in the event. While it favors them for a team title, having nearly all their surfers remaining has created a situation where Olympic dreams could come down to a race between their fellow teammates.

In the first heat of the day Japan’s Hiroto Ohhara and Shun Murakami faced off in a battle with implications for Olympic qualification and team ranking. Murakami, who holds a provisional slot earned at the 2019 ISA World Surfing Games, could lose his spot if Ohhara were to qualify ahead of him in the 2021 World Surfing Games.

Today, both surfers advanced through to the Main Event, where Ohhara will find himself in another heat with a teammate, Kanoa Igarashi.

“It’s a little weird competing with a teammate for the Olympic slot, but we are coming for a gold medal for the team,” said Ohhara. “If me, Shun, and Kanoa all make the final, team Japan will get a Gold Medal and that would be amazing. We will just surf and do what we do. There are still a couple more heats to go so we are just trying to get through.

Similarly, the two women remaining for Team Japan, Mahina Maeda and Amuro Tsuzuki have the potential to override the continental slot earned by teammate Shino Matsuda in the 2019 ISA World Surfing Games if they both are to finish among the top 7 eligible in 2021.

The hometown hero Bryan Perez continued his graceful, fluid surfing in the Repechage Rounds. Perez passed through both of his Repechage Rounds on Friday, eliminating top contenders such as Italy’s Leonardo Fioravanti and Indonesia’s Rio Waida on the way.

“I am glad to have all these people here in El Salvador supporting me,” said Perez. “I am so blessed this event is happening here. Being an Olympic surfer is my dream, so that’s the focus. It would be everything. And being the first Salvadoran surfer in the Olympics is even more special. I can’t wait.”

Team France intends to round out France’s Olympic squad

With two women remaining in the event for Team France, they are well-situated to round out their Olympic team, which currently has one opening for a woman. Vahine Fierro and 2017 ISA World Surfing Games Gold Medalist Pauline Ado are the contenders to fill it.

“Being one step closer to qualifying for the Olympics is a dream for every athlete in this event,” said Fierro. “Team France is surfing really well, so it would be the cherry on top to win Olympic qualification and Team Gold.”

Heading into the final stretch of the competition, Team France and Japan are both neck and neck in potential points with 5 surfers a piece remaining. While trailing by 60 potential points, Japan holds the slight advantage over France with 4 of their 5 surfers still unbeaten in the Main Event versus 3 for France.

Team France last won the Gold in 2017 when they hosted the event in Biarritz, while Japan also won as the host nation in 2018 when the competition took place in Tahara.

Australia and Portugal currently trail with three surfers in the event.

Leading the charge for Team France, Jeremy Flores advanced through to the Men’s Main Event Semifinals along with teammate Joan Duru.

“They asked us to come here to surf the ISA World Surfing Games,” said Flores. “It’s an event I’ve been surfing for a long time. I could be with my family right now. I miss my daughter so much, but I am here to do my job. I am here to surf and represent my country.”

After six days have passed in the competition the qualification picture has begun to become clearer.

For the second consecutive day both the men’s and women’s day-high heat totals belonged to the Australians.

Wright has been surfing consistently throughout the event, owning three of the event’s top six male heat totals thus far and asserting himself as a strong Gold Medal favorite come finals day.

Olympic hopeful Manuel Selman of Team Chile put on a stellar performance in the Men’s Repechage Rounds. Selman took a wave that Owen Wright let go by that ended up providing excellent scoring potential. Not letting such a wave go to waste, Selman surfed excellently on his backhand to mark the first men’s 9-point ride of the event thus far in the competition to advance and keep his Olympic dreams alive.

“What another day of non-stop excitement, drama, and emotion here in El Salvador. Today we saw provisionally qualified Olympians become officially qualified Olympians. They can book their tickets all the way to Tokyo now. These final two days of competition will be the most important in ISA history. The final 12 Olympic slots are still to be determined with a talented, world-class field of surfers to compete for the honor of becoming Olympians.”