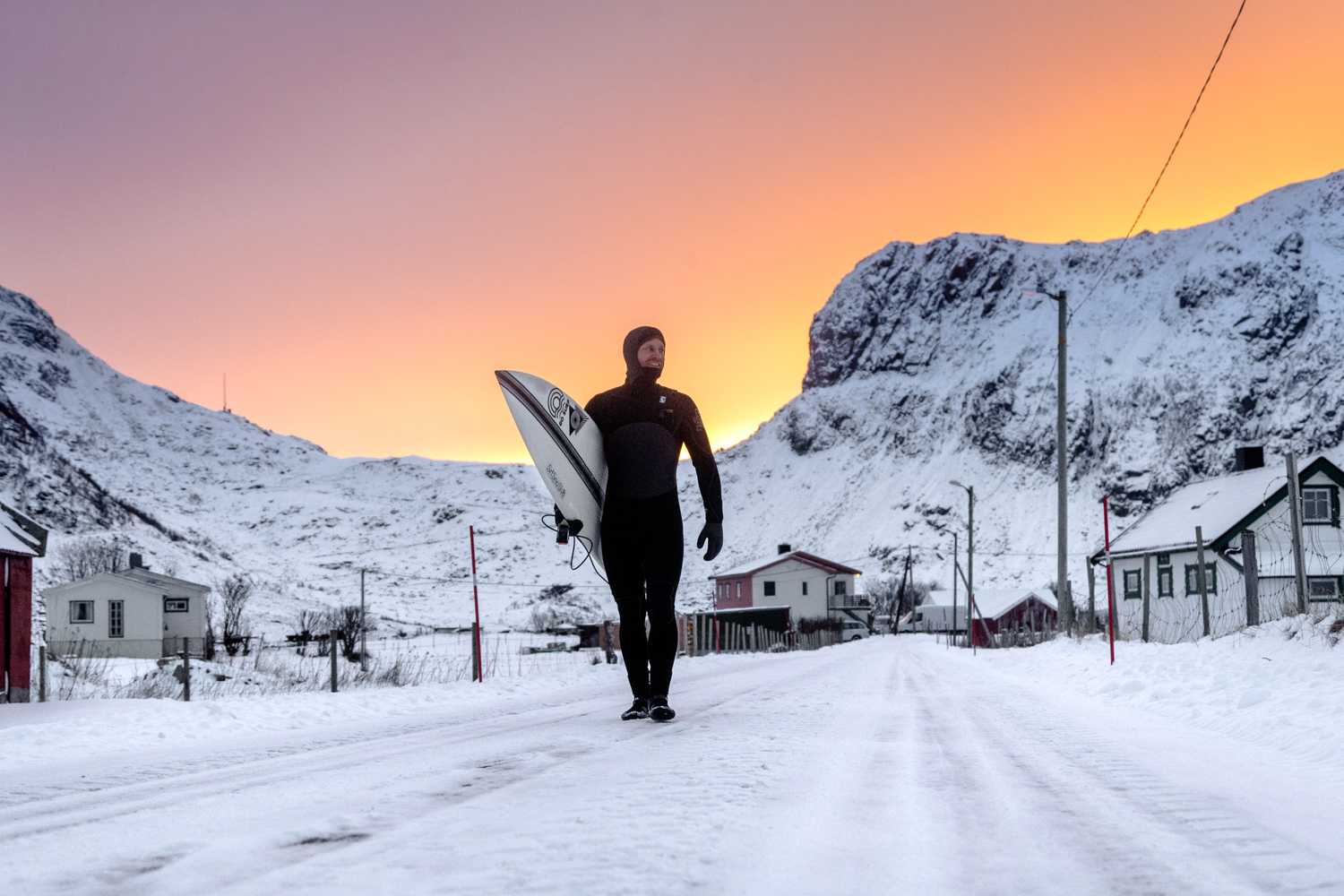 Shannon Ainslie heads out for a surf on the frozen streets of Unstad, Norway, the small town that he now calls home. Photo: Hallvard Kollveit

Two decades ago Shannon Ainslie’s life took a dramatic turn that could have cost him everything, but has blossomed into a blessing in disguise.

While Surfing his home break of Nahoon Beach in South Africa, Shannon was attacked by not one, but two great white sharks. With his hand clenched in a shark’s jaw, he managed to escape and make it to safety – surviving an experience that would teach him a lifetime’s worth of lessons.

Shannon emerged from his shark attack eager to have a positive impact in the world and make a difference. He discovered his outlet to have that lasting impact through surf coaching – starting his own school in South Africa and eventually heading up north to the Arctic Circle to train surfers and coaches in the frigid waters of Norway.

Now an ISA Course Presenter, Shannon trains the next generation of surf coaches and athletes, opening up his treasure trove of knowledge to his students.

Instead of us telling his whole story, we went straight to the source and caught up with the South African surf coach currently residing in Norway.

ISA: Tell us about your journey to becoming a surf coach. What excites you about teaching others to surf?

Ever since I had my double shark attack I wanted to get more involved in surfing to use it as a platform to not only teach surfing, but to teach life to people. It’s helped me walk roads with amazing people and also given me the chance to help others through surfing.

When I moved to Jeffreys Bay at the age of 19 I joined a surfers Bible school run by Des Sawyer. He helped me start a surf school and in the process I helped coach his son for many years who then became a pro surfer and WSL World Longboard champion (Steven Sawyer). I ended up coaching a lot of young kids who turned out to become really good and represent South Africa (also one representative for The Netherlands and one for Germany) at various ISA World Championships.

ISA: What is your core philosophy around surf coaching?

Having patience is super important as an athlete or a coach. The ocean and waves are constantly changing and each surfer will learn different things and learn them in different ways. I tell surfers that one of two things will happen in surfing. Either the wave will conquer them and it can get frustrating at times, or they can conquer the waves. When they conquer the waves and surf or ride them well it gives that rewarding feeling that you’ve conquered something that can conquer you and it gives you confidence and stoke, which is what every surfer wants to feel. This takes preparation and patience and that is important to understand.

Yes! I’ve learned so many things. I’d say the most important is to have fun. I found myself at times being too hard on my students and on myself and ended up forgetting the main reason why we surf. When I’m too hard on my students I take that fun factor away from them and that’s not good. Even if you’re training a top professional athlete it’s still important to keep the training and competing fun, otherwise they lose their focus and passion.

ISA: As an ISA Course Presenter, what unique value does the ISA course offering provide for future surf coaches?

The ISA gives surf coaches the foundational elements along with the building blocks to become a better surf coach. The ISA Surf Level 1 and 2 Courses both have great content to learn how to teach surfers from a beginner to a competitive level. And as the governing body of surfing it definitely gives a surf coach solid credibility when they teach others knowing they have an ISA accreditation.

ISA: Now you live and coach in northern Norway at Lofoten Surfsenter, what has the experience been like as a surfer in the Arctic Circle?

Yes. I’m working at the Lofoten Surfsenter, an ISA Registered Surf School, and we also started surf camps in different destinations called Go Surf. Lofoten Surfsenter isn’t just a surf school either. As the surf coach for the National Team we also work on surf development with juniors and run high-performance training camps with the team. It’s really fun!

The best thing is that living and surfing above the Arctic Circle is amazing. The winters get extremely cold and brutal but that brings great waves along with it. Most people leave during the winter, but the ones who stay here are like Vikings (haha) because you’ve got to endure the elements. Fortunately, for good wetsuit technology you can stay warm in the water but too many duck dives or wipe outs causes the worst ice cream headaches you could ever imagine. And I’m sure you know that the winter is quite dark too. You don’t see the sun at all for about two months but at least the northern lights keep you entertained!

ISA: How do the conditions of living at such an extreme latitude affect your approach to coaching, if at all?

It’s not too bad in the summer because there is 24 hours of light and it can be warm, but the fall, winter and spring are much colder. When I’m doing beginner lessons I’ve just got to make sure I keep moving to keep warm. My students are always warm because we warm up well and I keep them active in the water.

When I’m coaching and filming from the beach I dress up as if I’m going to the North Pole and always bring extra clothes because it could rain, hail and snow while standing on the beach. I don’t change my approach to the way I coach too much though. We do some theory and all the video coaching in the Surfsenter, but the coaching at the beach stays the same. We do have slightly longer coaching sessions than most people but we break each session into different stages so the surfers come into the beach and go back to water several times during their session to get feedback and then practice what was discussed.

ISA: Having survived a harrowing double shark attack in South Africa, how has that experience shaped your life and the person that you are today?

Well one thing is for certain and that is I’m a lot more thankful and grateful for life and this keeps me content, I suppose. I also am reminded of my attack every day because people always ask me about it and this also opens up doors for me to share how it taught me to overcome other personal issues in my life. I’m often reminded when faced with certain challenges that I’ve already overcome a double shark attack and more. It helps me push through to make it through all circumstances.

I’m sure these conversations stir up thoughts in people and make them think about overcoming certain issues in their own lives. It reminds them to be thankful for the life they have.

ISA: If you could point out one important training tip to a beginner surfer, what would it be?

There are so many…but I’d have to say in my opinion for a beginner it’s to catch as many waves as possible. We learn by doing and too often beginner surfers will catch one wave every 15-20 minutes, which in a 2 hour session is only 8-10 waves. If you ride each wave for 10 seconds (which is a lot for some beginners) then that’s 80-100 seconds of surfing that you’ve actually practiced. Imagine going to football practice and you only train for 80-100 seconds…there won’t be too much improvement. Yes, surfing is a lot different because you need to paddle and duck-dive or turtle roll a lot, but if beginners can try catch more waves and avoid sitting and waiting for too long that will help a lot.

ISA: Who has had the greatest influence on you as a person, a surfer, and a surf coach, and in what way?

I’d have to say it’s Des Sawyer. He and his family are like family to me and he has helped me with a lot and taught me so many things. He’s a great surfboard builder, a good surfer in his day and is very knowledgeable and wise. He basically took me under his wing when I moved to Jeffreys Bay as a 19-year-old and helped me in my surfing, my personal life and finding a purpose to life. Without him I’d never be who I am and where I am now and I’d never have any purpose to the passions I have in life.

ISA: What is your great achievement as a surf coach?

I’d say being a part of some surfers lives who over time some surfed the WQS, qualified for the WSL and won the WSL longboard world title. Walking a long road through surf coaching and basic life with them and seeing how they succeeded was a great achievement.

ISA: What is one word you would use to describe yourself?

ISA: What are your goals for the future? Both personal and professional.

To continue growing and improving my knowledge and skill as a surfer and surf coach and using what I learn to pass onto others so that the sport of surfing in Norway grows. A part of this is to focus mostly on junior surf development so that Norway grows into a strong surfing nation. The country has the second longest coastline in the world. Think about that!

To add to this I’d have to say the most important goal for me is to stay humble and grateful for the life surfing and surf coaching brings and to use it as an opportunity to make a difference in people’s lives.