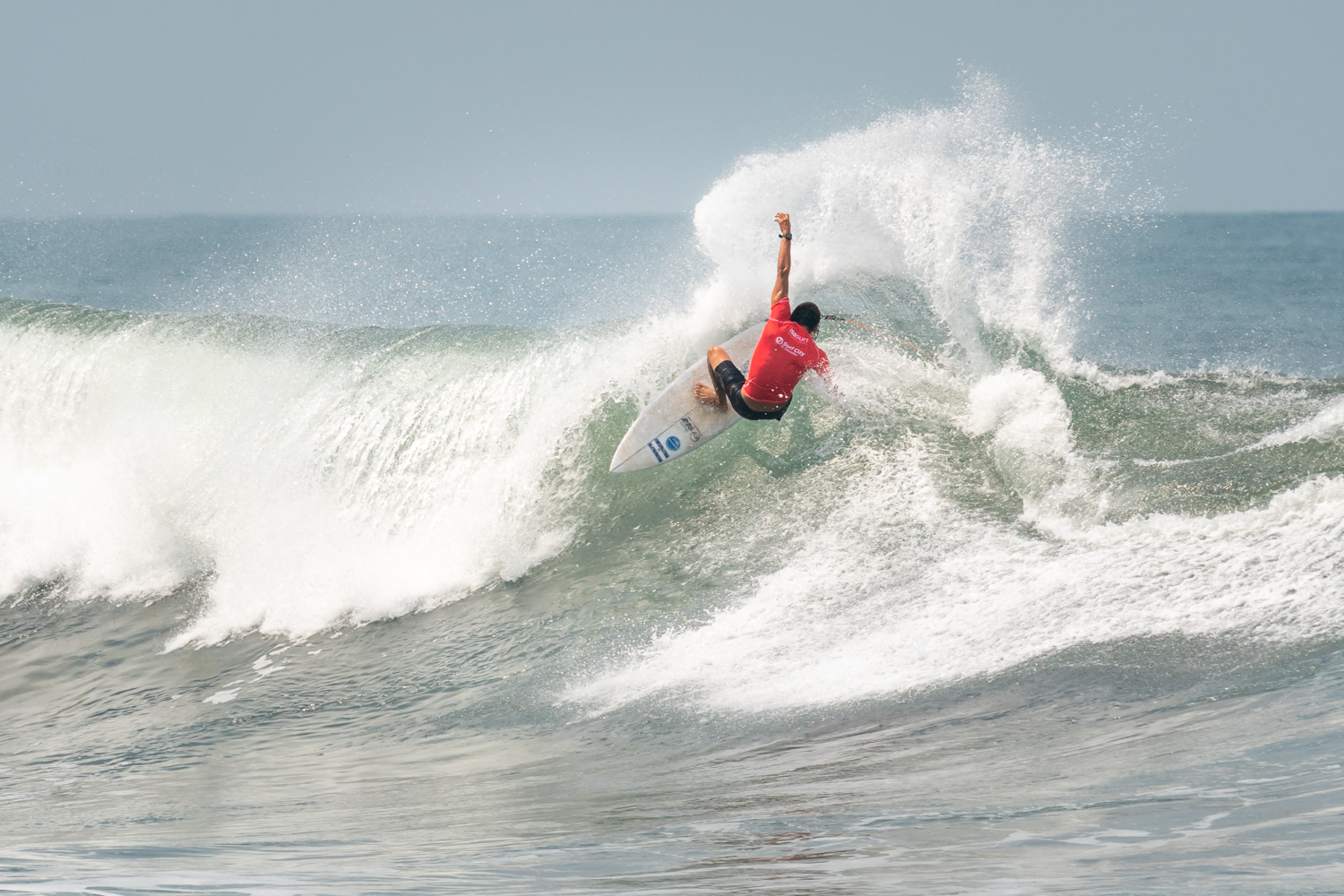 El Salvador’s Bryan Perez gave it his all but was unable to advance through the Main Event on Tuesday. He’ll be back in action in the Repechage Rounds with a chance to continue in the event. Photo: ISA / Sean Evans

After three days of competition at the 2021 Surf City El Salvador ISA World Surfing Games the chase for Gold Medals and Olympic qualification is heating up among the 51 competing nations.

The women’s Repechage Rounds at El Sunzal featured some excellent surfing from the female surfers determined to keep their Olympic dreams alive. The Repechage Rounds give surfers who lose in the Main Event a second chance to advance, however they present a longer, more challenging road to the Grand Final.

Portugal’s Yolanda Sequeira made the most of the afternoon low tide conditions with two of the most crucial maneuvers among any surfer in the event thus far. Sequeira was awarded for her commitment and earned a near-perfect 9.6-point ride. Sequeira was able to move into first place in the heat advancing alongside qualified Olympian Stephanie Gilmore (AUS).

A couple of past ISA World Surfing Games Gold Medalists who lost their footing in their first heats of the event were able to regain their composure and get back on track in Repechage Round 1. Mexico’s 2017 Gold Medalist Jhony Corzo and Argentina’s two-time Gold Medalist Leandro Usuna both avoided elimination with convincing performances.

The Main Events rolled on at La Bocana with a few upsets that sent stars such as 2-time World Surfing Games Gold Medalist Sally Fitzgibbons (AUS), down to Repechage where they will look to take the long route to a medal.

The hometown hero and local favorite Bryan Perez narrowly missed out on a buzzer-beater wave to advance and ended up falling to Repechage.

Perez now has to face the elimination rounds, but he plans to surf loose without pressure.

“The waves are really tricky,” said Perez. “But they are good and fun. I got third in the heat but I still have another chance. I am still as focused and motivated as ever. I am so stoked just to be here and can’t wait to go out there my next heat and show my surfing.

“I am not going to change my strategy that much moving forward. Next round I am going to try to enjoy it more and have fun, no pressure. I am not going to be thinking so much, just be in the present. That’s my goal for the next round.”

The top male performance of the day also belonged to a Venezuelan, Rafael Pereira, who earned a total of 14.83 points

Costa Rica’s Leilani McGonagle continued strong in the Women’s Main Event, making it to the halfway point to the Grand Final. Aside from qualifying for Tokyo, McGonagle has deeper reasons to go for an Olympic slot.

“Winning is fun, however I feel like I am surfing for a greater purpose,” said McGonagle. “I was really close friends with Katherine Diaz who recently passed away here at La Bocana. She was a really important person to me. Waking up every day here in El Salvador and not seeing her is really hard for me. I think it would be an honor to qualify for my country, but even more so to qualify for her at her home break. I am surfing with her by my side and by my heart.”

“I’ve been doing ISA World Championships since I was 13 and I love these events. I feel really lucky with the year we had that we are able to compete again and represent my country. I’m just having fun.

“It’s a great mix of girls competing here. We have some young girls emerging, previous CT surfers, and even World Title holders like Sofia Mulanovich.”

“It’s amazing to think that we are less than two months away from Tokyo. It’s going to be a very different Olympic Games, but we are safe, we’re healthy, and the Games will go on. The whole surfing world is looking forward to that. For many years we knew it was coming, but now it feels great to be on the doorstep.

“I look around and I see all different types of people from all different walks of life. I see rich, poor, young, old, white, black, and I smile at how we are bringing together all these different nations in peace, in the name of a sport: surfing. At the same time when I look around at all these promising, inspirational athletes, I see 12 Olympians – 5 men and 7 women. We still don’t know who they are, and neither do they, but come Sunday they will have booked their tickets to Tokyo 2020. Now that is exciting.”