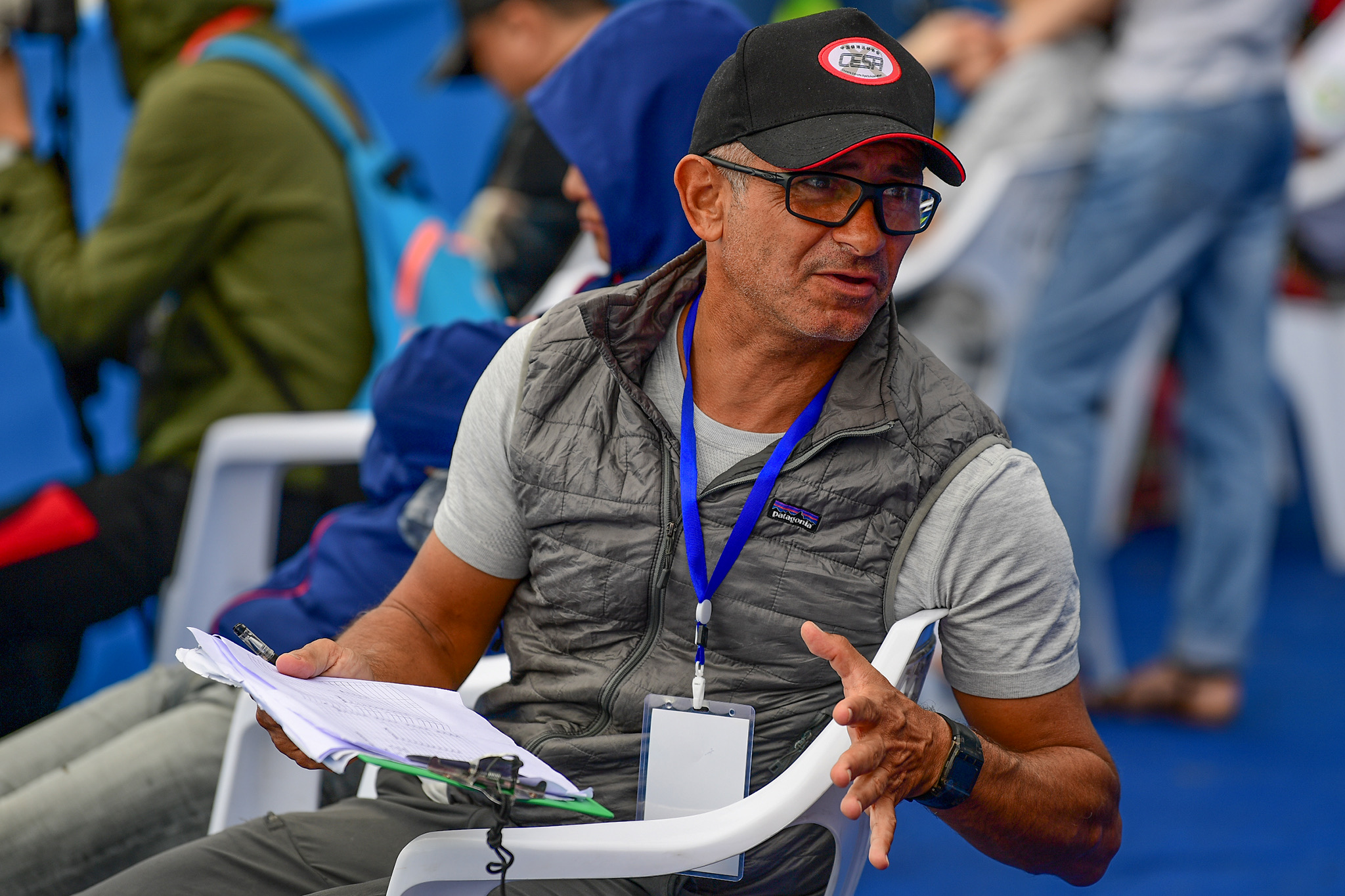 Presenter Nik Zanella has knack for finding himself on the front lines of global surf exploration. Now he’s found a home in China and a niche for laying the foundation for the sport to flourish in the world’s most populous nation.

While most surfers in the world rush to the sure-bet wave magnets for their surf trips, Italy’s Nik Zanella runs the opposite direction. Zanella seeks out the unknown, unexplored, and untapped potential to push the known frontiers of surfing.

Instead of taking the safe route of getting great waves, in a well-known destination such as Bali, Nik has found himself on the coast of China, studying new surf spots, training surf instructors, and teaching the up-and-comers to plant the joy of surfing among the people of China.

Nik’s adventures in China have awarded him with a treasure trove of new experiences and knowledge, from exploring the coast of North Korea to unmasking the ancient secrets of Chinese wave-riding, which he explains in his recently released book.

1) ISA: How did you end up in China and become a key player in the development of Chinese Surfing?

China and surfing always walked hand in hand in my life. I was fascinated by both cultures since an early age. I started surfing in Italy at age 13, took Chinese language in university in Venice, Italy and in the 90s I sustained my surf life by working as a mandarin interpreter. In 2000 I became the editor of SurfNews Magazine, the main surf media in Italy at that time. It was an exploration oriented magazine, we mapped most of the Mediterranean Sea, so it was just natural to move on and scout the coastline of China, often together with photographer-explorer John Callahan. In 2010 John, Sam Bleakley and a crew of international surfers were recruited by the Hainan Ministry of Tourism to scout Hainan island for the first international event. I was invited at that event, fell in love with the empty waves and warm people and in 2011 I quit my job in Italy and relocated in front of a right-hand point break. From then on I worked at almost every event held in Riyue Bay, as an announcer and PR facilitator, namely the ISA China cup and the WSL longboard World Cup. I was also the surf and SUP operation manager for an outdoor company called Insight Adventures, catering international schools in China and that’s when I contacted the ISA and got the ball rolling, took the level 1 myself, got trained in water safety and rescue then in 2014 became presenter myself with the help of former ISA Director General Bob Mignogna and ISA President Fernando Aguerre who supported the China project from day one. Then in 2014 Surfing China and Peter Townend were asked to recruit the first Chinese National Team and I became PT’s assistant coach.

2) ISA: You have been one of the coaches of the Chinese National Team. What is the process for selecting and training the national surfing teams? How has Surfing’s Olympic inclusion played a role in kickstarting surfing’s growth in China?

Surf in China was not really a thing until it became an Olympic sport. The inclusion in 2016 changed everything. China started treating it like a real sport, establishing national championships and official teams. Surfers active before 2016 counted just a few dozen. Young athletes were selected from other sports, then assigned to the national team. As an ISA Level 2 Surf Coach and course presenter, I was invited to recruit and lead the B Team, the new kids, while PT was with the A Team. I learned a lot from him. Three of my kids made the finals that year, after surfing only 6 months. It was a great success. Surfing life here is quite different from what you are used in the west. Athletes live in the training facility full time, they get schooled on site, and pretty much surf or do surf specific training every day for 8 hours per day. They love it and I loved the surf-eat-sleep-repeat routine. There’s a lively national circuit of competitions and the best get to spend extended periods abroad, in Indonesia, Australia and the US, at least in the pre-COVID days.

3) ISA: What is the future of surfing in China? How long until we see top-level surfers coming out of the country?

This is hard to say. At this stage I’m not involved with the national team anymore, I do consulting and instructor trainings. But with such a training program, the vast recruitment net, and the good surf conditions in Hainan, improvement is fast. The best athletes already surf at a QS level and there are many promising talents in between age 8 and 12. Just give them a few more years and they will shine internationally.

4) ISA: As an ISA Course Presenter, how has the ISA course offering helped lay the groundwork for the sport’s grassroots development?

The support of the ISA was vital in spreading a message of safety and inclusion. We created the first generation of instructors that now operate following the ISA protocol. Surfing is booming right now in China and many of the ISA coaches I formed years ago are now involved in the National Project or running their own school. They are proud of following international standards of safety, quality, and efficacy set by the ISA. Of course there’s still a lot to work to do, but ISA trainings are in high demand. We have one coming up on 31st October and it is already fully booked.

5) ISA: What are the most valuable skills that you pass on to aspiring coaches through the ISA Courses?

Safety and respect of the environment are on top of my list. I also integrate my courses with notions of surf history, because most Chinese don’t speak nor read English and it is important for them to know about Duke Kahanamoku, the shortboard revolution and other historic aspects, including China’s own wave-riding history that I researched on my book Children of the Tide.

6) ISA: What are some of the biggest challenges you have faced in assimilating to a new country and teaching a nearly brand-new sport?

Unlike many foreigners living and working in China, I wasn’t sent here by a company. I came here for the culture and to surf the perfect point breaks of Hainan. I was nearly alone in the water for 10 years. It was like ‘The Morning of the Earth,’ but with Chinese characteristics. But the times were ready for surfing to bloom, so many things fell into place naturally. Language is always a burden. Mandarin is now my second language but mastering the specific lingo for training and negotiation was a challenge. Another challenge was food. I still bring my Parmesan, olive oil and coffee from Italy at every trip. You can take an Italian out of Italy but can’t take Italy out of an Italian!

7) ISA: You also were involved with multiple surf trips to North Korea – what was that like?

The DPRK (Democratic People’s Republic of Korea is the how they call their country) is one of the most beautiful and pristine coastlines you can think of, but the politics there are problematic, to say the least. As an explorer, I kept looking at the maps, wondering about those empty set-ups of granite cliffs, crystal clear water and typhoon exposed bays. Then one day I sent an email to Uri Tours, an operator based in Shanghai that organised trips there, proposing to do a surf-diplomacy trip to teach surfing and SUP to locals. They got in touch with the government and after over one year of negotiations (most of the coastline is militarised and restricted) in 2014 they gave us the green light. In three successive trips we scouted two different surf areas and a few stunning SUP river routes, we also brought boards, wetsuits, and most of all we started a surf and SUP community that is still active today in Majon, north Hamhung province. 2016 and 17 were tough times in terms of international relations, the idea behind our trip was to create a common ground in sport, a place where politics and nationalism were left aside. Surfing doesn’t give you freedom, but it sure makes you feel free and connected, and I think nobody needs that more that people from the DPRK.

8) ISA: What is one of the most valuable lessons you’ve learned during your time exploring new surfing frontiers?

I got shot at on the beach in Sri Lanka during the civil war, surfed with sharks in Kenya, explored the coasts of Tunisia during the turmoil, almost got arrested for surfing the Qiantang river-bore in China, lots of adventures and many mistakes I wouldn’t repeat. I think I now learned to push the limits, but from inside the system, respecting local laws and customs. Teaching surfing in China to kids that have never experienced the beach nor the ocean surely taught me a lot. Just witnessing their first wave, their smiles, and then sharing stories on the beach was something I will never forget. It made me who I am and still motivates me.

9) ISA: You recently published a book, ‘Children of the Tide’, where you explore the ancient origins of wave-riding in China. In summary, what did you discover during your research?

During my Uni studies I kept bumping into detailed descriptions of waves, mostly tidal bores, and references to the art of ‘treading waves’, 踏浪 Ta lang in Chinese. Then in 2006 I found the first evidence of this local pre-contact wave-riding in a Buddhist temple in Yunnan province, 600km from the sea. It was a clay bas-relief of zen monks surfing on fishes, dated 1880. I inquired about their name, in Chinese they were called 弄潮儿 Nong Chao Er, Children of the Tide, so for the past ten years I researched occurrences in poems, dynastic reports and novels. It turned out that China had its own version of wave-riding, starting from the 9th century and peaking during the 13th century. They were mainly surfing the tidal waves of the Qiantang River in Hangzhou, near Shanghai, the biggest in the world, taller than the famous Pororoka in Brazil. I spent extensive time there, in libraries, museums and attending conferences or talking to fishermen, and found out that they kept surfing it until the late 1980s, mainly on wooden finless boards similar to Hawaiian holos. My book reconstructs their story all the way to modern times. Surprisingly their same spot in Hangzhou is now the site of the only bore-riding surf competition, the Battle at the Silver Dragon, organised yearly by Peter Townend and Wabsono, hosting both international and Chinese surf teams.

The book is distributed in digital on amazon here

It was totally self-funded, edited by Sam Bleakley and it had great reviews by the intelligentsia of surf culture.