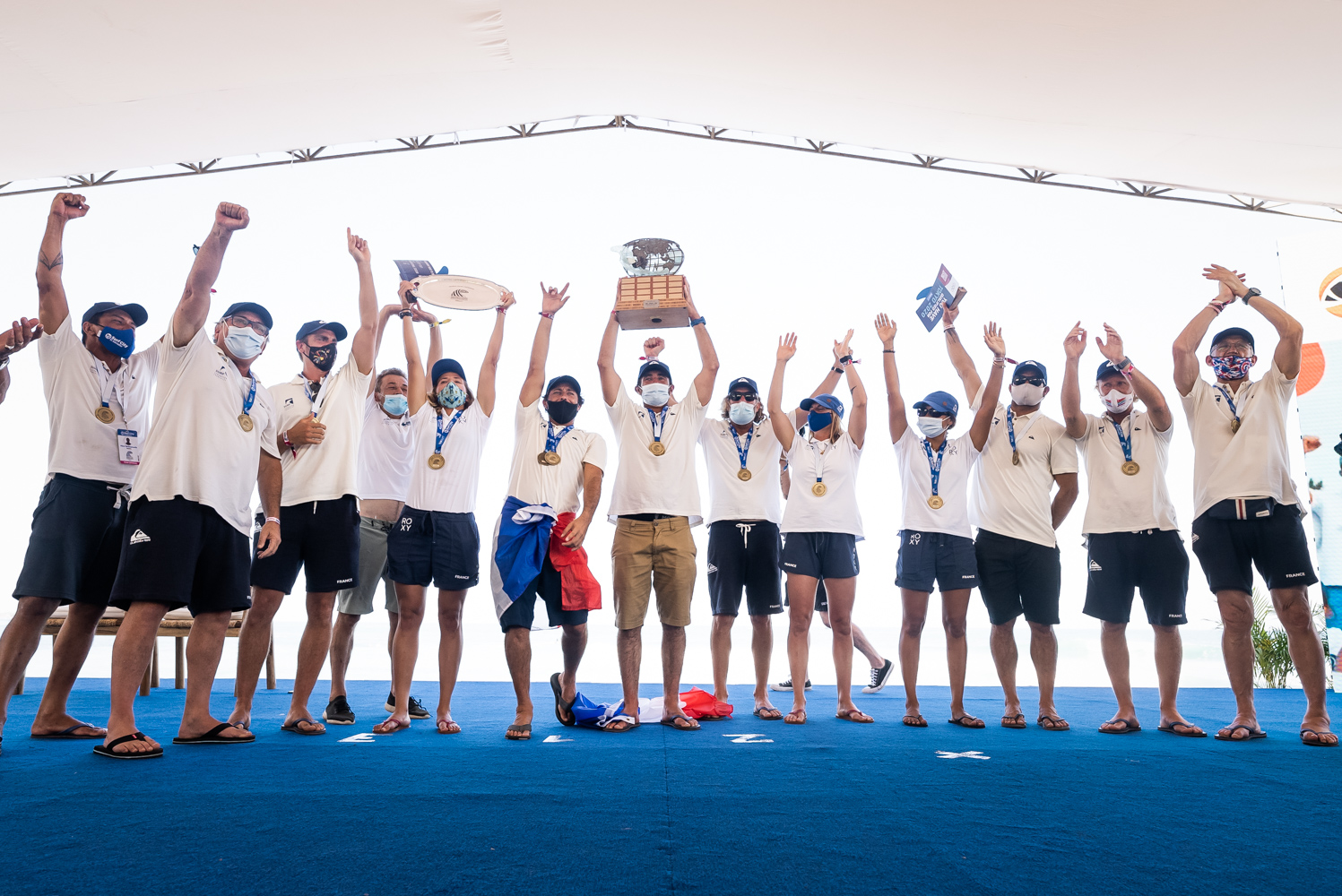 Team France hoists their Gold Medals and will now prepare to send a full team of 2 men and 2 women to the Tokyo 2020 Olympics. Photo: ISA / Sean Evans

Team France was crowned the Team Gold Medalist of the 2021 Surf City El Salvador ISA World Surfing Games on Sunday at the break of La Bocana.

Lead by an individual Gold Medal from Joan Duru and a Bronze Medal from Jeremy Flores, Team France surpassed the Silver Medal Team Japan in the final heat of the day to emerge victorious among the 51-nation field. It is France’s first Gold since they won and hosted the 2017 edition in Biarritz, France.

“I am so stoked I can’t believe it yet,” said Duru. “I did not expect to do this well at all. I’ve been at home for over a year. I lost sponsors. Then this contest came up so I just got back into training four weeks ago. I can’t believe I won.”

Team Japan on the rise

Team Japan followed France with a Silver Medal – the third consecutive edition of the event that they have placed on the Team podium, a testament to the huge growth of Japanese surfing ahead of the Tokyo 2020 Olympics.

Portugal earned the Team Bronze and Peru the Copper.

Australia’s Sally Fitzgibbons made history by becoming the first athlete to ever earn individual Gold three times in the World Surfing Games. Fitzgibbons first accomplished the feat in 2008 before earning her second Gold in 2018. 2021 marks her third Gold, which puts her in a category of her own and gives her a boost of momentum ahead of her Olympic debut.

“This event has been an unreal platform to test our mental strength,” said Fitzgibbons. “It’s surreal to be wearing the Gold Medal at the end of the week.

“This is a great runway heading into Tokyo 2020. Just competing and seeing all the Olympians get their spots is great. Being on the World Tour we don’t get to surf against a lot of the other Olympians. It’s good practice to go against them and spend time bonding with the rest of the Aussie team.

“Surfing has finally arrived as a global sport. It’s got the recognition now. We are going to the Olympics. It’s cool to have that as a milestone in my career. I want to go as long as I can in the sport because I love it.”

Going into the final day of competition 39 of the 40 total Olympic slots had been determined, leaving just one spot left to be earned at the 2021 World Surfing Games. The final slot would be decided in the Men’s Repechage Final between two teammates, Japan’s Hiroto Ohhara and Shun Murakami.

Ohhara stepped up to the occasion and marked two waves in the excellent range including a 9-point ride. Ohhara moved onto the Grand Final to secure his slot and contest a medal, while Murakami didn’t get the necessary scores to advance.

To crown the first medalists of the day, the Women’s Grand Final took to the water featuring 4 surfers who had all already confirmed their slots in Tokyo 2020.

Australia’s Sally Fitzgibbons, who qualified via the 2019 WSL Championship Tour, squared off against three surfers who had earned their qualification on Saturday through the 2021 World Surfing Games: Portugal’s Yolanda Sequeira, Portugal’s Teresa Bonvalot, and Peru’s Daniella Rosas.

Fitzgibbons’ experience proved valuable against three surfers who had never earned a World Surfing Games medal before. Her heat total of 14.10 led her to the Gold ahead of Silver Medal Sequeira, Bronze Medal Bonvalot, and Copper Medal Rosas.

The Men’s Grand Final featured some of surfing’s top talent and provided a preview for the surfing to come at Tokyo 2020.

France’s Duru and Flores faced Japan’s Kanoa Igarashi and Ohhara in a heat that would determine not only the Men’s Medalists, but also the overall team ranking.

Duru utilized a strategy of patience, only catching three waves in the entire Final. However, those three waves were all he needed to post a 14.94 heat total and take a lead that he would not relinquish.

Japan’s Igarashi gave Duru a run for his money with high performance maneuvers, but it proved not enough, earning him the Silver Medal to match his 2018 World Surfing Games result.

After learning that he had earned his slot for Tokyo 2020 on Saturday, Germany’s Leon Glatzer surfed like an Olympian and posted the highest heat total of the event. Glatzer’s signature aerials earned a near-perfect 18.46 heat total, higher than any other total in the event between the men or women.

While Glatzer didn’t advance through to the Final at the end of the day, he spoke about the experience of becoming an Olympian.

“Yesterday was one of the biggest days in my life,” said Glatzer. “There was so much work put into it for the last three years. It’s been an emotional roller coaster waking up every day and feeling the Olympics at my doorstep.

“I don’t know what happened to me, but last night I woke up in pain and vomiting. I decided to surf today anyway. I wanted to have fun and I had one of the most fun heats of my life, just being free and surfing.”

At the Closing Ceremony, the ISA brought all Olympians in attendance to the stage to recognize their historic achievements in becoming part of the first wave of Olympic surfers.

Additionally, Aguerre recognized the strong commitment and support of the government of El Salvador to host this historic edition of the event by providing Tourism Minister Morena Valdez with a plaque of recognition and the ‘Sands of the World’ from the Opening Ceremony, so the event’s legacy remains in El Salvador.

The 2021 Surf City El Salvador ISA World Surfing Games marked the end of the Qualification System for Surfing in Tokyo 2020.

The 40 total qualifiers hail from 17 different countries, representative of the global reach and appeal of surfing.

Now Surfing’s set its sight on Tokyo 2020, the debut of the sport on the Olympic stage.

“It has truly been a historic week for Surfing here in El Salvador, and I don’t say that lightly. We managed to create a safe and secure environment to gather 51 surfing nations from around the world in peace for the first time since the start of the pandemic. That alone was a feat in itself, but then we also successfully completed Surfing’s Olympic Qualification and confirmed the Olympic dreams of 40 surfers from all around the world. This is a moment that will live on in surfing history for decades, or centuries to come – the day we officially announced the first Olympic surfers.

“El Salvador has provided us with the perfect venue to run this global event. The waves did not stop all week, allowing the world’s best National Surfing Teams to put their surfing on display. I would like to give a special thanks to the President of El Salvador, Nayib Bukele, for believing in the power of surfing and believing in our mission to make the world a better place through surfing. We hope to be back soon!”

“It took me 22 years of paddling to catch the Olympic Wave. That has been done. And we now have our first 40 Olympians. The Olympic wave belongs to each of us.”

As part of the ceremony, Aguerre unveiled the recently created and recorded ISA Song, “A Better World Through Surfing”.  Aguerre said:  “Written by multiple Grammy winner Sr Flavio Cianciarulo from Argentina, the song celebrates our love for the oceans and our belief in a better world through surfing.