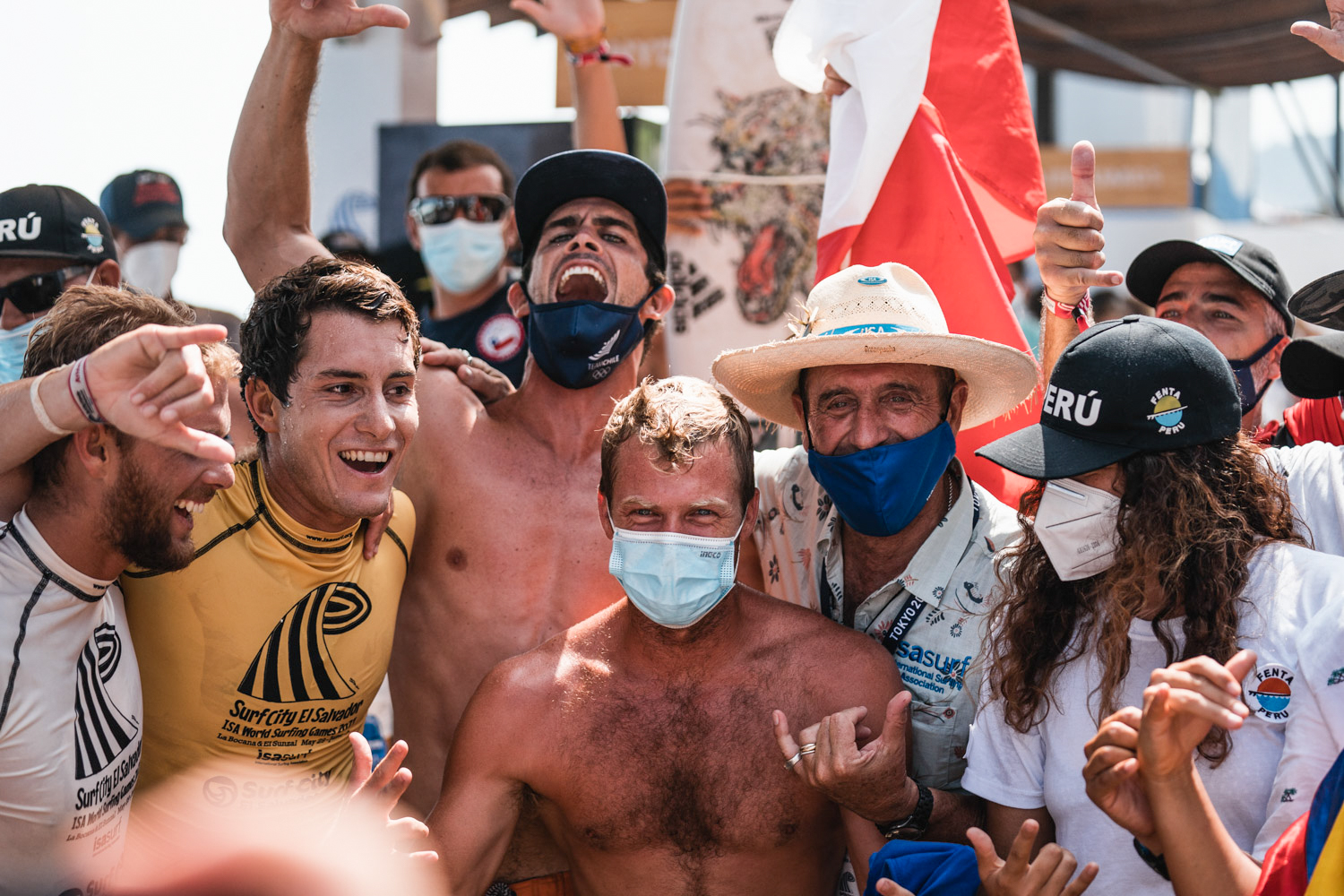 Individual and Team Gold Medalists to be crowned on Sunday

The penultimate day of action at the 2021 Surf City El Salvador ISA World Surfing Games featured a flurry of Olympic qualification at the break of La Bocana.

39 of the 40 Olympic surfers have officially been confirmed for Surfing’s Olympic debut next month at Tokyo 2020. The 40 qualified surfers will hail from 17 different countries, a display of the universality of the sport that has been a central part of the ISA’s mission to make a better world through Surfing.

The 2021 ISA World Surfing Games awards slots to the highest ranking eligible 5 men and 7 women – 11 of which were decided on Saturday.

4 of the 5 men’s slots were earned by Germany’s Leon Glatzer, Peru’s Lucca Mesinas and Miguel Tudela, and Chile’s Manuel Selman.

The one men’s slot left up for grabs will be decided by two surfers: Japan’s Hiroto Ohhara and Shun Murakami. Both have advanced far enough to make it to finals day – Murakami in the Main Event and Ohhara in the Repechage.

The qualification shake up on Saturday resulted in spots that had been provisionally earned in previous qualification events being reallocated to other surfers.

Given that the two Japanese men, Murakami and Ohhara, are competing to fill Japan’s final male slot, that means that the 2019 continental slot earned by Murakami at the 2019 World Surfing Games will be reallocated to the next eligible Asian surfer, which in this case is Indonesia’s Rio Waida.

In a stroke of fate, the 2019 ISA World Surfing Games Gold Medalist Sofia Mulanovich of Peru found her way into the Olympic Games after falling out of the event earlier this week. Due to the fact that Japan qualified two women at the 2021 World Surfing Games, the provisional slot earned by Japan’s Shino Matsuda at the 2019 World Surfing Games needed to be reallocated as well to the next eligible surfer in the event.

Given there was no eligible Asian woman in the top 30 ranking surfers to meet the quality control standard in the Olympic Qualification System, the slot was then given to the next ranking surfer of any continent, which was the Gold Medalist Mulanovich.

Mulanovich will now join a Team Peru that finds themselves with a full squad, maxing out their slots for 2 men and 2 women in Tokyo.

Portuguese duo use teamwork to qualify; Years of hard work pay off for McGonagle

The first heat of the day with qualification ramifications was the Women’s Main Event Round 5. Each heat awarded slots to the top two finishing surfers.

The first heat saw Portuguese teammates Bonvalot and Sequeira matched up against France’s Ado and Japan’s Maeda. Utilizing strategy and teamwork, the Portuguese were able to fend off their competitors to claim two Olympic slots for their country at the same time.

“It’s definitely an amazing feeling,” said Bonvalot. “This is a goal that I set more than two years ago. I am super stoked for Tokyo.

“This is so important to me,” said Sequeira. “I couldn’t ask for more. I am over the moon.

“We had a plan that whoever was in a more comfortable position in the heat would come to help the other at the end. Teresa was in a good position so she came over to assist me to try to stop any other competitor from getting a good score to surpass me.”

Having competed in ISA Global Events for the past decade and earning a trove of individual and Team Medals, Costa Rica’s Leilani McGonagle has put in the hard work to perform well in the World Surfing Games.

The hard work paid off as McGonagle advanced into the Women’s Main Event Final along with Peru’s Rosas, securing her slot to compete in Tokyo 2020 alongside teammate Brisa Hennessy.

France’s Pauline Ado climbs back to the top

Pauline Ado of Team France didn’t lose her composure after missing out on a qualification slot in the Main Event this morning. She bounced back and surfed well in the Repechage to confirm her status among the highest ranking eligible 7 women in the event.

The 2017 World Surfing Games Gold Medalist Ado explained what a tough road it has been to get here.

“I wasn’t sure when I got out of the water if I was in or not,” said Ado. “It’s overwhelming. I am so happy. I went through so many emotions this week. Last time I wasn’t even on the team and now I climbed my way back into the team and it is a dream come true.

“I still can’t believe it. It is too good to be true. I am super proud to be going to Tokyo to join my teammates and surf alongside Johanne Defay.”

The first men’s slot of the day was earned by the German-born but Costa Rican raised Leon Glatzer.

Glatzer put his repertoire of aerials on display to rise above the competition and earn his ticket to Tokyo.

“It still feels unreal to be here,” said Glatzer. “We’ve put in so much work with the German team. It’s definitely history to be the only German.

“I can finally relax my emotions and get a good night’s sleep. I haven’t been sleeping well all week. I’ve been waking up at three in the morning, eyes wide open, ready to go. Tonight that will change.

“Tomorrow I am just going to have fun. I am going to enjoy the moment and have the best time of my life.”

The following men’s heat was set to qualify the top two men, while the third place finisher would face a tie breaker with Chile’s Manuel Selman who had earned third in the previous heat.

Mesinas and Tudela demonstrated the strength of Peruvian surfing to the world and advanced on in the event to secure their slots.

The fourth men’s qualification slot would be determined by Indonesia’s Ketut Agus. Needing more than a 10.73 heat total to overcome the tie breaker with Selman, Agus fell on his final wave, unable to attain the needed score. Agus’ heat total of 10.13 was not enough, awarding the slot to Selman.

Heading into the final day of competition Japan has placed themselves in position to strike for Team Gold. A Gold Medal would be their second in the history of the event, after they earned their first when they hosted the World Surfing Games in Tahara, Japan.

Japan currently has the most potential points available to earn with all three men – Kanoa Igarashi, Murakami, and Ohhara – remaining in the event, with Mahina Maeda still on the women’s side.

The Peruvians follow in Bronze position with the Portuguese in Copper position.

The individual Gold Medalists will be awarded on Sunday afternoon, followed by the Closing Ceremony which will recognize all the surfers that have qualified for Tokyo 2020.

Of the surfers remaining in the event, only France’s Ado (2017) and Flores (2009) have ever earned ISA individual Gold before in the event. Experience will be on their side, however, many young up-and-comers will be champing at the bit to get their shot at the Gold.

Bryan Perez, the pride of El Salvador, comes up short

During a morning of talent-packed Repechage Rounds, one of the surfers to bow out of the event was El Salvador’s own Bryan Perez.

With the weight of a nation behind him, Perez had put on a courageous performance throughout the whole event, representing his country with pride. Unfortunately the Olympic run came to an end for this Pan Am Bronze Medalist, but the future is looking bright for this up-and-coming 21 year old.

“The Olympic spirit has been stronger than ever today. Emotions showed, tears flowed, and dreams were fulfilled during this penultimate day of competition. Finally we know nearly all of the men and women who will raise their country’s flags in Tokyo.

“And to those young surfers who did not qualify, I have some words for you. In just three years you will get another chance to compete in the Paris 2024 Games in Teahupo’o, Tahiti. Focus and get back to work, because surfing is here to stay in the Olympic Games.

“A total of 17 countries qualified among the 40 surfers. We have countries such as Indonesia, Germany, Morocco, and Argentina competing in the Games. That is a true testament to the growth and universality of our sport, part of a major goal of ours to spread the joy of Surfing to all corners of the globe.

“Tomorrow the stage is set for a historic day of crowning Gold Medalists and rounding out the qualification for Tokyo.”