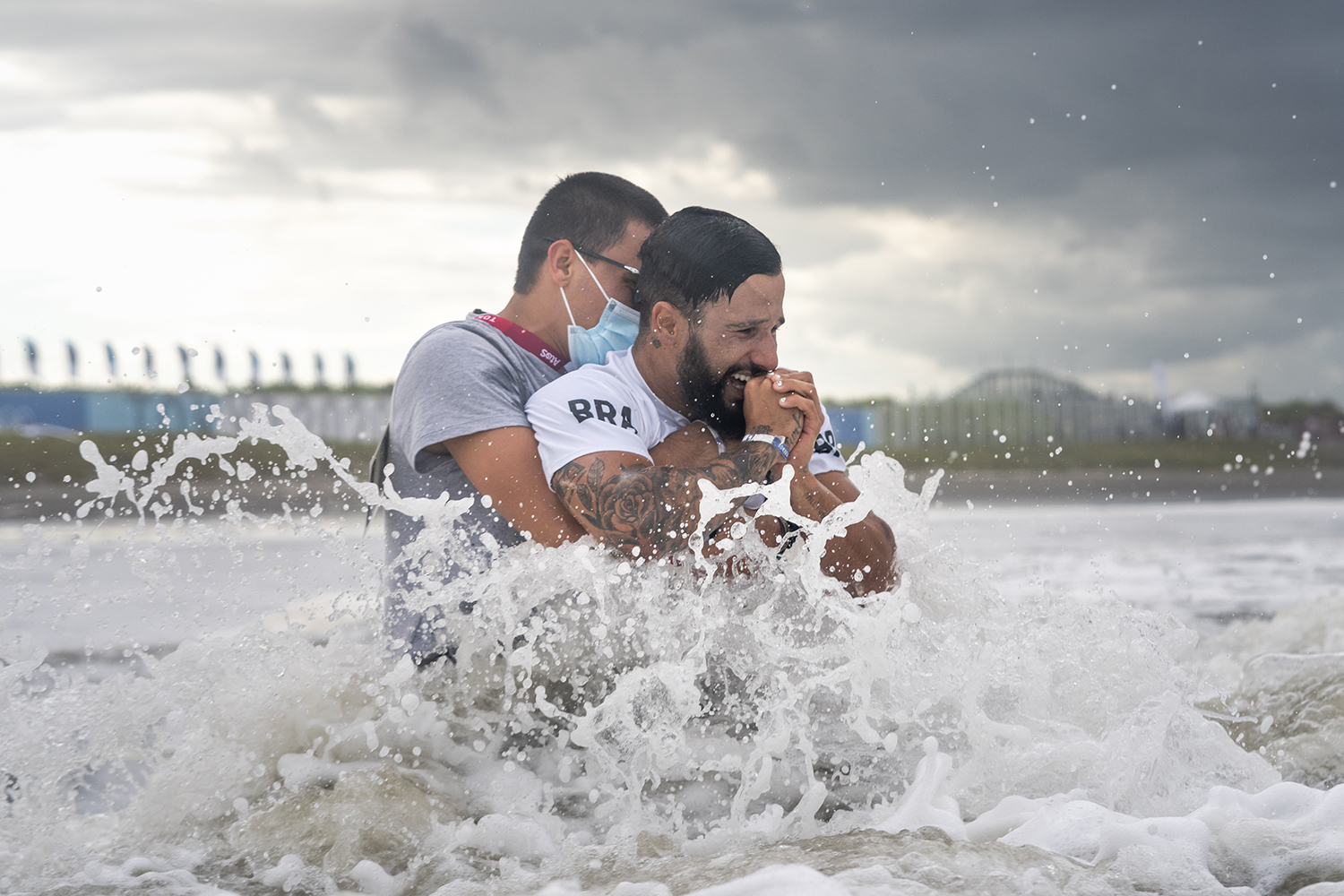 For the first time in history, Surfing was part of the Olympic Sports Program at the Tokyo 2020 Games. Surfers hailing from 18 countries across all 5 continents stepped into the global spotlight to show the power of Surfing to the world. History was made, Olympic Champions crowned, and dreams of countless youth around the world ignited, knowing that they too now have the ability to become Olympians.

Here are ten memorable moments from Surfing’s first-ever inclusion in the Olympic Games:

More than a century ago, the father of modern surfing, Duke Kahanamoku, first expressed his dream to see Surfing become an Olympic sport.

A native Hawaiian, Duke was an all-around waterman and an Olympic caliber swimmer. At the 1912 Stockholm Games, Duke swam for USA and earned a Gold Medal, starting his dream to one day see Surfing join the Olympic Program.

“Getting to share the sport with so many people that maybe have never even watched surfing was super special,” said Moore. “As a Hawaiian, just seeing Duke Kahanamoku’s dream come true to have surfing in the Olympics is super special. It’s a big time for surfing to be recognized on this level.”

Brazil’s Italo Ferreira rose to global stardom as he was crowned the Men’s Olympic Surfing Champion. Ferreira has Olympic Gold, World Surfing Games Gold, and a WSL CT Title all under his belt, a trifecta of accomplishments that may never be matched.

In true surfing fashion, Ferreira added a unique twist to his medal celebration, doing a backflip off the podium.

Coming in as the 17th seed in the women’s competition, few were counting on South Africa’s Bianca Buitendag to place on the podium. Still, with a powerful show of surfing and an unmatched sense of determination, Buitendag battled her way through to the final where she came away with the Silver Medal – an inspirational underdog story.

Buitendag confirmed after accepting her medal that this Olympic competition would, in fact, be her last. She used this momentous moment to mark the end of her career.

“I felt like I had made the most of all the opportunities that I had in my sporting career,” said Buitendag. “I just had to finalize and respect the commitments that I have made to myself and my country. I felt like this would be the perfect opportunity for closure. It’s true [that I am retiring]. For personal reasons and many others, I am looking forward to the next season of my life.”

Owen Wright’s rise to the podium was a feat that would have looked impossible just a few years ago. After suffering a head injury at Pipeline in 2015, Wright had to sit out of competitive surfing for more than a year and relearn his mastery in the water.

Wright not only got his career back on track, but he also excelled and earned a Bronze Medal at the Games.

“Without my friends and family, I couldn’t have done it,” said Wright. “I couldn’t have done it without the Olympic coaches and the staff here, they really helped me get to one hundred percent and get through that recovery from my Traumatic Brain Injury. That’s the reason I’m standing here. That fueled me on to get to this position. As a surfer, a lot of people probably didn’t count me as a medal hopeful, but I had the strength from what I’ve been through.”

Two medals for the host nation

The performance of the Japanese surfers in the Games confirmed that Team Japan is an up-and-coming surf power to be reckoned with.

Japan’s Kanoa Igarashi overcame an improbable semifinals deficit and landed a last-minute aerial that awarded him the highest heat total of the event. The aerial propelled Igarashi past Brazilian superstar Gabriel Medina and eventually to the Silver Medal.

On the women’s side, 20-year-old Amuro Tsuzuki shined for the home nation and took the women’s Bronze Medal, making Japan the only nation to come away with two Olympic Surfing medals.

“I feel like Japan was already on its way up and the Olympics definitely gave it a boost,” said Igarashi. “My dream one day is to use this boost to push more Japanese surfers, more Asian surfers, to be on Tour. Hopefully one day we have just as many top surfers as America, Australia, and Brazil.”

Surfing into the Olympic Ceremony

Surfing made its presence known at the Games from the get-go. Four surfers had the high honor of bearing their nation’s flag at the Opening Ceremony, and a surfing judge, Masato Kato, pronounced the Olympic Oath on behalf of all Games officials.

Bach feels the stoke of Surfing

IOC President Thomas Bach had an extensive visit at the surfing venue to witness one of the Games’ new sports in person.

Bach, who joined ISA President Fernando Aguerre for a full tour of the site, met the world’s best surfers and experienced the Surfing culture and lifestyle at what would have been the Olympic Surfing Festival.

More than a century since Duke Kahanamoku’s dream and more than 25 years since ISA President Fernando Aguerre began lobbying for the sport’s inclusion, Surfing finally made history and debuted on the greatest stage in sport.

Surfing successfully injected the Games with its youth-oriented culture and lifestyle in what represents the new age of Olympism. The participating surfers can now call themselves Olympians for the rest of their lives. They were the first, but not the last. In just three years, the next wave of Olympians will get to pursue their dreams and compete at the world-renowned wave of Teahupo’o, Tahiti at the Paris 2024 Games.

Just prior to the opening of the Tokyo 2020 Games, the IOC announced that Brisbane would be host of the 2032 Olympic Games. Home to some of Australia’s world-renowned surf spots, Brisbane creates a pathway for long-term inclusion of Surfing in the Program.

With inclusion in Paris 2024 already confirmed to be held in Tahiti, LA 2028 and Brisbane 2032 could not be held in more idyllic Surfing locations, creating a bright runway for the future of Olympic Surfing.

Surfing’s gratitude for our Japan hosts, proving that we are #StrongerTogether

Along with the rest of the Olympic Movement, the ISA faced the unique and unprecedented challenges of delivering our sport following the postponement and in the face of the pandemic.  We are deeply grateful to the IOC and the Tokyo 2020 organizing committee, and in particular our Surfing Sport Team, for creating an environment for the Games to run safely and successfully. We would like the especially recognize and thank the people of Japan for their kindness, hospitality and patience in supporting this truly remarkable edition of the Olympic Games. During these exceptionally challenging times, the Olympics was able to show to the world that sport has the power to change the world and that we are #StrongerTogether.